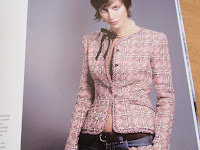 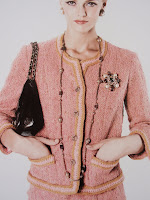 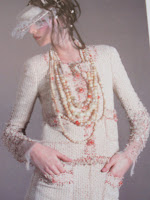 Here are a few pictures from the book Chanel Collections and Creations. Photo 1 is from 1960 and photo 2 is from 2003. As beautiful as Lagerfeld's creations are I am admittedly partial to Mademoiselle's. She was all about functional design, elegant simplicity and rejected fashion that was restraining. I chose these 2 photos because I think they showcase the difference between Chanel today and Chanel, the original. The 60's version looks like I could just throw it on and run to the grocery store. Whereas, Lagerfeld's version would definitely be a little over the top for my local Wal Mart!

The center picture, a 2002 design, is my inspiration for this sew along. And yes, I know I just said I liked the vintage designs best but this jacket combines the best of both designers. It is more body conscious thanks to Lagerfeld and yet it has the understated elegance of Mademoiselle. (For the record, I'll be wearing something under my jacket.) Okay, enough of my editorial.

I'll just close with 2 quotes that I think best summarize the vision of the woman whose art still inspires us. " Nothing is more beautiful than freedom of the body" and "Luxury is not the opposite of poverty; it is the opposite of vulgarity."
Posted by Elizabeth at 5:51 PM