I know most of you are just getting acquainted and here I am forging ahead. The thing is, I sew what I have an interest in, and I do it step by step ( in most cases, sew 2 seams, unpick 1) until I'm finished. I don't keep a stash of patterns or fabric. I start a project, I work my way though it, and then I finish it. I choose my next project, buy the fabric and start all over again. So you see, now I've started this jacket I have to work to the end.
I did manage to make up the side seams by stealing the inside facing. I even managed to make them match! I put in my princess seam darts and then followed through with a tuck to the pocket.  I'm being humbled by this process: I used to mock faux anything. I've now got a faux princess tuck, and I'm contemplating faux pockets, by running my trim from the corner of one (pre-existing welt pocket) to the other edge in a curve like a tidy wee Chanel patch pocket. What's the world coming to! 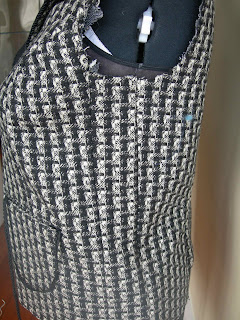 Because of all my tight cutting I fused the entire front and back with interfacing - and used fusible interfacing for the facings and collars. It's just not strong enough though, the collar's not sitting well through the roll line and I think it's because the undercollar isn't supporting the collar enough. I am now going to go back and herringbone stitch (catch stitch) in some hair canvas. That's a good evening in front of the telly. 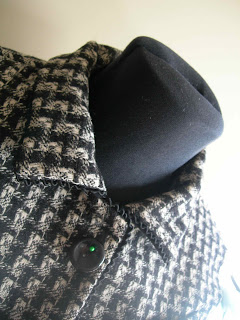 I've just pinned my black retro buttons on to see how they look. Sometimes houndstooth can look dangerously like clown suit fabric and I was worried by how round and shiny these buttons are, but I think they're OK. Won't be accesorizing this with a plastic red nose though, and my shoes will be not be large and pointy. 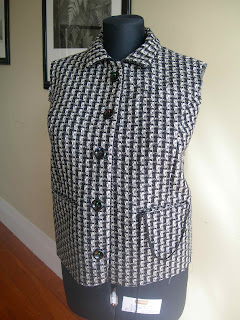 Refashioning a jacket is much much harder work than sewing a new one from scratch. Just thought I'd put that out there for my sew along buddies who are also refashioning something. Mind you, I think I'm the only one who's taken a jacket that was too small and tried to refashion it larger.
Oh and here's the original for you to compare my progress. In case you are thinking it looks too nice to be cut up, let me say that this jacket had shoulder pads to rival a grid iron player. It was more 80's than Dynasty. 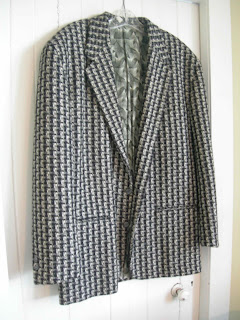