My jacket is finished 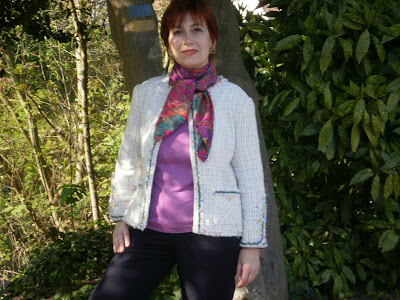 I've worn it this afternoon. I can say it is very pleasant to wear and light as a feather. What I like best is the lining ... 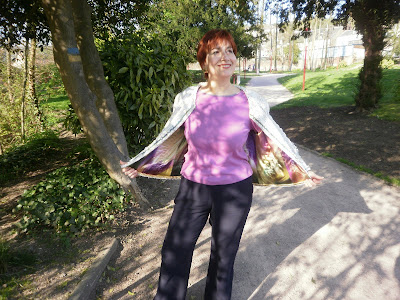 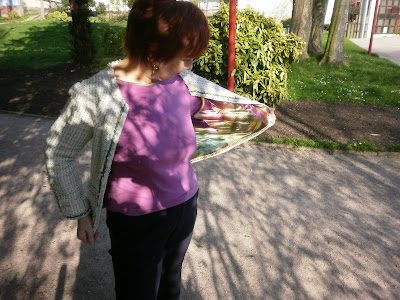 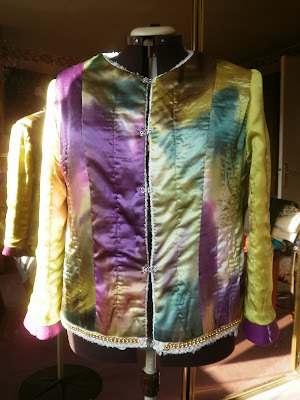 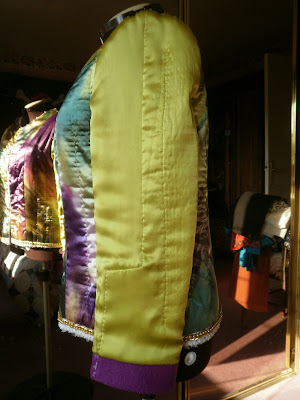 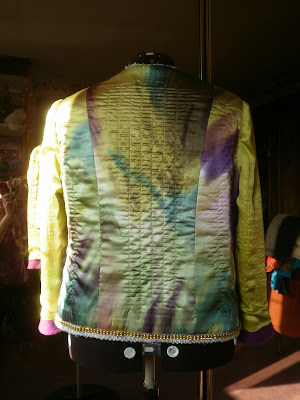 and the functional sleeve vents and hand buttonholes 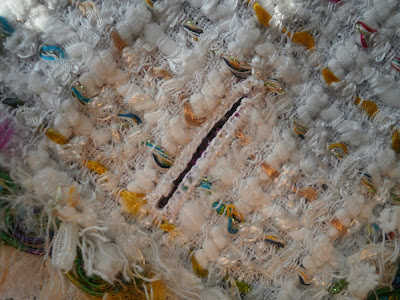 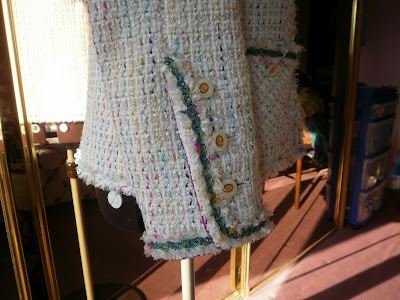 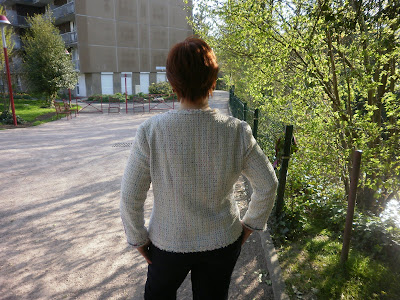 Nevertheless,though I made a muslin and I am not happy with the sleeve heads. I supposed it is because the sleeves are not from the same pattern as the bodice. The shoulders shoud be shorter I think, too bad realy. Another explanation is perhaps that the shoulders seams elongated because they have not been staystiched. This has just occured to me. Anyway I will have to do with this. I will try not to think about this when I wear the jacket. Here is what it looks like seen from the back

When it was time to choose the pattern I recalled I had seen a Chanel style pattern on Burda Magazine 10/2009 - 128. I started working with it, making the alterations I usually need. I could not make it fit, no matter how I tried...  It was probably a wrong combination between the checked fabric, the diagonal dart and the amount of fabric I should have added to make my FBA.

Then Burda Magazine 02/2010 was published and pattern 108 simply called me from the pages of the magazine.

My idea was to distort the fabric grain as little as possible, so I transformed the vertical dart into an armhole princess seam and moved the back darts into the side seams.
I wanted the front pieces to overlap to have buttons (the original pattern did not overlap), so I separated the facing piece from the front piece and added the necessary amount to get it.
The sleeves, finally, were too close fitting, so they needed to be enlarged.

A lot of work, but I had a pattern for my jacket!!! It was time to play with the fabric, then!

Posted by Silk Challis at 5:21 PM No comments:

Assembled jacket before Chanel finishing touches.
This is as far as I got last year before the heat wave hit Sydney and it was way too hot to be sewing wool. However, I have never considered this project a UFO. It has stayed out on my dress form and I have played with different trims, finally deciding on the dark purple from E.M. Greenfield (hand washed in warm water with mild soap to pre-shrink before stitching in place).

Back view of Chanel jacket showing fit & shaping.
This was such a fun project. Thank you Cindy and Antoinette for setting up the sew-along and to everyone else for the inspiration and camaraderie. Now I'm looking forward to the cooler weather!
Posted by Dilliander at 6:28 PM 12 comments:

It was the fabric first

Hello! I'm Challis, and I have been reading this blog for a long time. I have been inspired more than once by the Chanel style jackets posted here and I just completed mine.
Before all, I would like to thank Antoinette and Cindy for setting up this blog and for letting me post here and I'd like to congratulate with all the nice people who post here.
Let's talk about the jacket then!
I fell in love with this black and white boucle during last Autumn, and I have been wondering what to make out of it since then. That is when I first met this blog and I started reading and following... it would be nice to make a Chanel style jacket with the boucle, I tought.  So the boucle I loved came home with me and my sewing adventure started.
Here follows another picture of the boucle, it is a blend of wool, polyester and lurex. Unfortunately the nice silver sparkling thread is not visible in the picture. I cut a sample, to put in the washing machine. It came out perfect, so I pretreated all the fabric with the washing machine in a delicate wool cycle.
It was time to choose the pattern then.
Posted by Silk Challis at 3:13 PM 2 comments: